One of my business-change mantras is: Men and Women Are Different. We all know this intuitively, yet in the workplace there continues to exist the unquestioned assumption that men and women are the same. The same as leaders. The same as contributors. The same as team-builders. The same as decision makers. We are not the same. Equal, yes, but different without doubt. And in my role as change advisor, I consistently tell senior leaders that gender is a strategic business imperative, not a women’s issue. To remain relevant and capture the significant wealth and expanding talent  women bring to the market, you must embrace this fact: “difference is the difference maker.”*

One notable way in which men and women differ (and the science continues to confirm these differences**) can be seen in networking and business-building styles. Women experience success and find fulfillment in maintaining and sharing rich webs of relationships where everybody wins. This approach to networking is generally subtler, less direct, and wrapped around events intended to promote long-term, mutually beneficial connections. ***

I’ve been in a male-dominated industry for a long time. I knew women needed a channel for their network activities. I am very practical by nature and I know that numbers can speak louder than words.  So, I proposed an experiment to prove the business advantages to be had when we recognize and support the concept that women network differently than men. To this end, we created a Women’s Advisory Council, which brought ten women financial advisors together to design “women-centric” avenues to network, develop business, and recruit talent.

This group of women seized the opportunity. They created programs and events that cast aside typical old-school networking activities (weekend golf, early-morning or after-work outings…) in favor of philanthropic, social, and community/business forums to attract, nurture, and develop clients in settings where women are focused on common passions and feel comfortable, safe, and in-community.

. The upshot: the experiment was successful and the fact that the women involved significantly outperformed the Firm’s averages in their performance metrics did not go unnoticed.

The concept has been refined, formalized, funded, and has grown to more than thirty Councils (and growing) throughout the Firm, with ongoing impressive results.

Because women-centric networking is not a widespread, engrained business practice, women haven’t had a formal means to support other women. The councils brought women together with a common purpose—to build their practices—through which they shaped relationships, developed trust, and discovered mutually beneficial connections. When this happened, the women began to help, promote, support, and share best practices with one another. As a result the women, as group, flourished.

More importantly, these networks are becoming self-sustaining and intergenerational, much as men’s networks have over the years. Women now open and expand markets, create new business, and generate goodwill in ways that previously were not possible because of structural barriers. Not because anyone was willfully trying to inhibit change, it was because the “assumption that men and women are the same” remained unquestioned. When you question this, perspectives change and new possibilities emerge.

There is another important take-away from the Women’s Councils: successful women now have a channel through which to advise, support, and mentor younger women. Without the formal platform the Councils provide, women were fragmented and often felt isolated because there are so few women in their offices, or they found themselves trapped by the traditional business practices of the male-perspective status quo. The Councils facilitated a woman’s preference to build relationships and grow her business by focusing on things she and her clients and prospects are passionate about.

A Women’s Council is but one example of how women shine a different light. While it is absolutely imperative that the differences between men and women be recognized and applied in ways that make our organizations better and more successful, it is also incumbent upon women to own the change. We must support one another. We can do this at every level of the organization and in every walk of our lives, whether formal channels exist or not.

Each of us has found our way because of the work and support of other women—those who have gone before us and opened the way. Yes, there’s still much more to do in terms of diversity. But what we can do—and what has become my mantra to women is: Climb, Pause, Lift.  Those of you on the “rung” above, “pause” and “lift” those below, those coming behind you. Make championing the success of all women part of your everyday practices. Supporting one another is paramount to our success. Men have been doing this for years—we need to embrace this same concept but in a women-centric way.

The difference is becoming more and more welcomed as the mainstream changes. And don’t forget, there are many good men who support and champion our numerous and marvelous differences. But it is vital that we support one another.  I’ll have more about Climb, Pause Lift in a future piece. 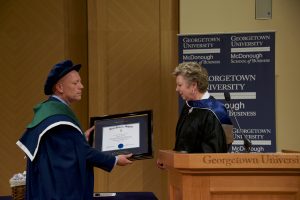 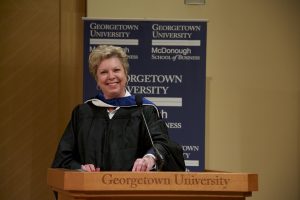 *    One source for review: McKinsey Report: How advancing women’s equality can add $12 trillion to global growth

**   For an overview of her female/male brain research, see this Tedx video by neuropsychiatrist, Louann Brizendine.

*** I also recommend this short, classic book by Carol Gilligan, A Different Voice, which helped lead the way for understanding the difference between men and women.

Lisa Cregan is Managing Director, Mid-Atlantic Regional Director, Morgan Stanley Wealth Management. She has more than 30 years of financial services field experience and has been a champion of and trendsetter for women since she entered the industry. Lisa holds a BA and MBA from Georgetown, sits on the board of The Women’s Sports Foundation, and brings her practical and inspiration insights on women and change to groups nationwide.

June 19-21, 2018. Welcome Semi-Finalists to the WomenConnect Solver Symposium: a global call for solutions to improve women’s participation in everyday life by meaningfully changing the ways women and girls access and use technology.

At the Georgetown University Women’s Leadership Institute (GUWLI), we generate scientific insight to empower real-world impact. We offer programs to develop principled leaders and partner with companies to create gender-neutral environments where all employees can thrive. The GUWLI Team and Affiliated Faculty invite you to get involved in our work. Join the conversation on Facebook and Twitter. Learn new strategies. Share your experiences. Together, we can help transform scientific insight into meaningful impact to create a better, more inclusive workforce.